Oboz, Family, and the Hospital 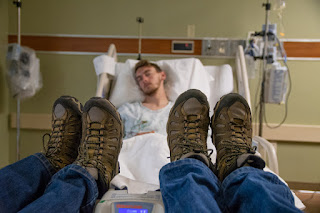 Our Oboz Adventures are about traveling and the outdoors.  But they’re also about friends and family. So our latest adventure began on November 1st, when our son called us from college in Fayetteville, Arkansas to say he was headed to the hospital with a probable collapsing right  lung. As scary as it sounds, we knew that it wasn’t a life-threatening emergency as long as he got medical attention. We’ve been through this before with his left lung. He’s tall and skinny, and young males with his build are sometimes susceptible to a “spontaneous pneumo-thorax”, or, in more normal-people-speak, a lung that decides to collapse all of a sudden.  All that being said, we answered the question Donna had asked just a half-hour earlier: What are we going to do with Grandma and Grandpa today? Her folks were still visiting after Robin’s wedding on October 28. So, we packed all their stuff, threw some clothes and supplies in a suitcase of our own, and hit the road for the 430 mile drive from Spring, Texas to Fayetteville, Arkansas.

Posted by OurObozAdventures at 9:49 AM No comments: 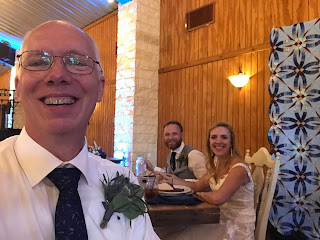 Early last Spring,  Donna got a text from Robin’s boyfriend, Peter, asking if we could meet him for breakfast on Easter Sunday.  We both knew what was coming. Every girl’s dad anticipates this moment, often with thoughts of making the poor guy sweat and answering the question while giving the subtle message:  “If you hurt my little girl...” Sure enough, after some small-talk, Peter got to the point and asked for our daughter’s hand in marriage. When it came right down to it, there was no sweat, no veiled threats.  We couldn’t ask for a better guy for our daughter. I simply told him that I knew this moment was coming before he did and that we would be thrilled to have him in our family!

Fast forward to October 28, the big day.  We were there, our Oboz were there, and I had a plan for a photograph. Unfortunately, the opportunity never presented itself for a good shot.  I floated the idea that we could wear them to the wedding, but that was quickly shot down. Next best thing would be a quick change into them for a photo, but things were too busy.  So we’ll have to make do with a few photos from the day without the boots.

Posted by OurObozAdventures at 9:18 AM No comments:

Unfortunately we didn’t get the requisite Oboz Adventure boot shot on this one, but rest-assured, they were there, comfortably getting us around one of the oldest airports in Texas while we looked at airplanes, talked with pilots, and just generally enjoyed the camaraderie that is aviation in general and fly-in’s in particular.

At first look, the Ranger airport is nothing special.  In fact, to the untrained eye, it does not even look like and airport.  There are no paved taxiways, no paved runways, no big Fixed Base Operator fueling business jets.  No, there is nothing but a big field with two grass runways, a hangar, a small shack used as an office, and a lot of history.

The Ranger Airport dates back to 1911, when R. G. Fowler landed in his Wright B Flyer. People have been landing there ever since.

Twenty years later, on June 16, 1931, Amelia Earhart landed her Pitcairn Autogiro at Ranger for fuel. Just a few years after her visit, on July 2, 1937, Amelia, disappeared with navigator Fred Noonan as she attempted to cross the Pacific in her Lockheed Electra.

Fast forward back to 2018. There were some fantastic airplanes, ranging from a 1927 Travel Air 4000 biplane, to a 1940’s era Beech Staggerwing--the Cadillac of personal airplanes back then, to modern Bellanca Scouts, Cessna 172’s, and Piper Cherokees. The festivities included a campfire in front of the hangar on Friday night and an airshow Saturday afternoon.  The highlight for us was a ride in the Travel Air on Sunday morning. After nearly 40 years as a pilot, this was actually my first time in an open-cockpit biplane. It was a blast even if I didn’t get to fly it!


Posted by OurObozAdventures at 10:06 AM No comments: 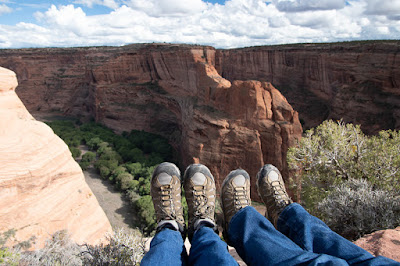 The next stop on our adventure tour was the Canyon De Chelly National Monument near Chinle, Arizona.  Kind of a cross between the Grand Canyon and Mesa Verde, Canyon De Chelly contains numerous ancient cliff dwellings as well as some gorgeous views.  The weather was considerably better than the Grand Canyon, though we got just enough rain to create a beautiful rainbow.  Since we had a long drive, the grand plan was to stop for about an hour, see what we could see, and press on.  We stayed four hours--which still wasn't enough but the sun went down so we couldn't see any more, so we had to press on down the road.  We made it to Moriarty, New Mexico--30 miles west of Albuquerque, about 1 am.   Without further ado... 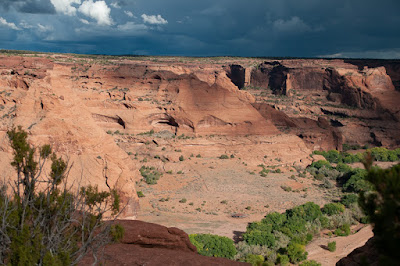 Posted by OurObozAdventures at 8:02 AM No comments: 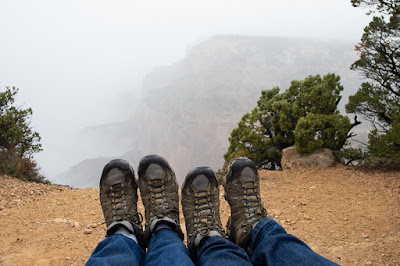 We live in the Houston, Texas area and tropical weather is not uncommon.  So we planned this trip to the Grand Canyon and the Desert Southwest.  Last place you would think of for a hurricane, right?  What could possibly go wrong?!  You guessed it.  As we were leaving the Houston area on this little odyssey, a lady (and I use the term loosely) named Rosa was approaching the coast of Mexico as a full-fledged hurricane.  So Rosa came ashore and worked her way north as we worked our way west, and we all met at the Grand Canyon on the same day.  Of course, Rosa wasn't still a hurricane, but she still filled the GC up with fog and rain.  We cancelled the mule ride, so, as it worked out, the only jackass Donna got to spend the day with was yours truly...  Honestly though, we made the best of it and had a great time.  We were on the much less populated North Rim and spent the day driving, hiking, and taking pictures.  We did get a bit of good visibility here and there, sometimes up to 3/4 of a mile or so, but for the most part, the vis stayed around 1/4 mile or less. 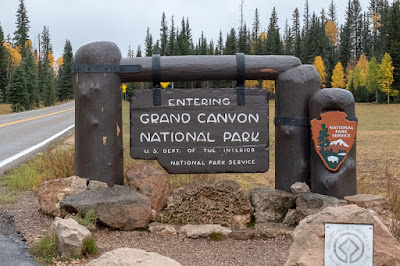 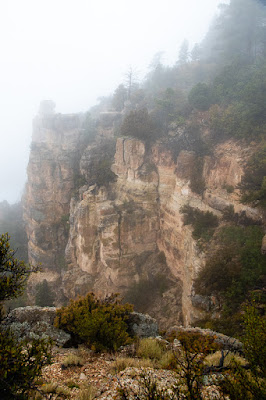 Posted by OurObozAdventures at 11:58 PM No comments: 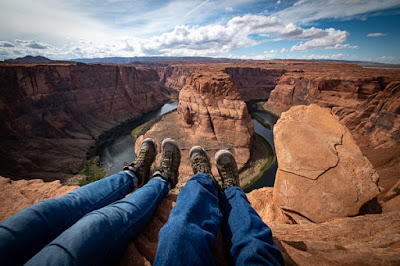 The next stop was the much-photographed Horseshoe Bend of the Colorado River, just downstream of Page, Arizona.  Here our Oboz are on the cliff above the iconic bend in the river.

There were several hundred people there, almost a constant parade of tourists.  When we first got to the rail, I was watching them stand up on the rock and walk to the very edge of the deep precipice, and either lift their cell phone for a selfie, or ham it up for a photo taken by friends.  I got a few shots and then had to leave--I did NOT want to see one of them go over the edge.  Luckily, nobody did.  We had a great time and got many photos of our own.

Posted by OurObozAdventures at 11:03 PM No comments: